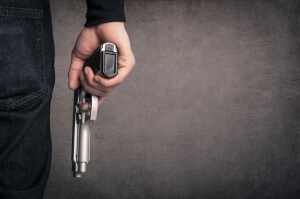 In order to best protect its citizens, California has strict laws about weapons, who may purchase and own weapons, which weapons are allowed in the state, and how weapons can be carried. Although a weapons offense in the state of California can carry very serious criminal consequences, the consequences will vary depending on the specific circumstances of the case. These circumstances include the type of weapon involved, how the weapon was used, and if drugs were involved.

California law requires anyone who purchases and owns a firearm to be licensed. The law also prohibits anyone from carrying a concealed weapon on their person or in their vehicle. Violation of the concealed weapons law is one of the most frequent weapons offenses and is charged as a misdemeanor punishable by up to a year in jail and a fine of up to $1,000. Other common weapons offenses in the state of California include:

Although the list of weapons included under a weapons offense includes more than illegal firearms, weapons offenses involving guns are among the most aggressively prosecuted in California. Most gun and illegal firearms convictions carry the prospect of jail time in state prison, expensive fines, and a mark on your criminal record which may make it difficult to obtain future employment.

Commonly referred to as California’s “felon with a firearm” law, Penal Code 29800 expands to include three main groups of individuals who are not allowed to purchase or carry handguns. These groups include convicted felons, anyone convicted of certain misdemeanors, and narcotic drug addicts. If you fall into any of the above groups and are convicted of owning, possessing, purchasing, or receiving a gun, your gun rights can be revoked for life. Additionally, they may be sentenced to up to three years in state prison, and be forced to pay a fine of up to $1,000.

There is a fair comparison to be made between weapons cases and drug cases. In cases involving drugs, if the search and seizure of the drugs was illegal, the evidence can be suppressed and that usually means the case gets dismissed.  Same thing in cases involving weapons. In weapons cases the most damning evidence is often the weapon itself.  If the search and seizure of the weapon can be shown to be illegal, then the case will often be dismissed in its entirety.

From time to time, the defendant can get a much lighter sentence and punishments for certain crimes if they negotiate a plea bargain. Other times, they can avoid these penalties altogether by being found ‘not guilty’ in a court of law. Regardless of your route of action, a criminal defense attorney experienced in weapons offenses can help you defend yourself in a court of law.

If you’ve been arrested on a weapons charge in the state of California, you may be facing jail time, fines, and a permanent mark on your criminal record. It’s important to ensure you have the aggressive legal representation you need in the face of whatever weapons offense you’re facing. The criminal defense lawyers at The Kavinoky Law Firm have the experience, track record, and legal knowledge necessary to represent you in a court of law.

A related issue is restoring the rights to own or possess firearms for people that have lost that privilege.  For example, certain kinds of convictions, such as domestic violence cases, will carry the collateral consequence of prohibiting the defendant from owning or possessing any guns.  This is a very unique area of the law, and if you have a prior criminal conviction that is impacting your ability to exercise your Second Amendment Right to bear arms and own a gun due to a past court action, please call us.