Unfortunately, boating under the influence season is here. The last day of school is here! Recreational boaters take to the local waterways to enjoy the summertime sunshine during boating season.

Since college and university students are out for the summer as well, young people and families will take advantage of the outdoors. Many will boat in the marina, Pacific Ocean, and local lakes. However, a nationwide initiative is underway to enforce boating under the influence laws.

Many people who enjoy boating in the summertime sun also like to have a cold beer or two while out on the water. However, even if you don’t take to the highways after boating, you can still be charged with operating under the influence if your watercraft is stopped and you are determined to be under the influence of alcohol or drugs.

Boating Under the Influence is a Crime

Boating under the influence, or BUI, is a violation under the California Harbors and Navigation Code, with possible penalties of up to $1,000 fines and up to 6 months in jail. As part of Operation Dry Water, agencies across the country participate in the program to raise awareness. Additionally, the program increases enforcement of boating under the influence laws. Locally, the Los Angeles Sheriffs at Castaic/Pyramid Lakes and Marina del Rey; the Los Angeles Port Police; and U.S. Coast Guard are participating in the program. June 26 to 28, 2015 is now the Operation Dry Water heightened enforcement weekend.

Operation Dry Water has been an annual tradition in BUI enforcement over the years. Launched in 2009 by the National Association of State Boating Law Administrators with the Coast Guard, the mission of the operation is to bring awareness and education to recreational boaters about the dangers of alcohol and drug use while out on the water. According to the U.S. Coast Guard, alcohol is the primary contributing factor in recreational boating fatalities. Agencies will put out increased patrols to look for boaters with a blood alcohol content (BAC) over the 0.08% California limit. Boaters found to be intoxicated may face arrest for a BUI.

We have a number of outdoor recreation areas for boating here in Southern California. These areas include Marina del Rey, the Port of Los Angeles, Lake Perris, Big Bear Lake, Lake Arrowhead, Lake Castaic, and even the Colorado Lagoon in Long Beach. Make sure you understand the California BUI laws before taking to the water in any of these lakes, beaches, or parks this weekend.

A BAC of greater than 0.05%, but less than 0.08% does not create a presumption of intoxication. However, it is a sign of intoxication, which police may use as evidence. However, a BAC of 0.08% or greater creates a presumption that the boater was under the influence of alcohol. For boaters under the age of 21, there is a zero-tolerance policy towards BUIs. Knowing this, an individual under 21 with a BAC of only 0.01% or greater will face arrest. A BUI conviction counts towards a prior offenses. A drunk driving conviction within 10 years of a BUI is technically a second DUI. The penalties will increase from the first conviction.

If you find yourself under arrest for driving or boating under the influence, call an experienced criminal defense attorney at The Kavinoky Law Firm immediately. We employ your Top DUI Lawyer LA, CA. We hire the best attorneys in Los Angeles to provide the best defense possible. Call anytime 24/7. We don’t sleep – so you can.

Boating under the influence laws are strictly enforced, and are especially pertinent the summer months.

Summer pretty much translates to water time. Whether it’s a boat ride around the lake, hanging at the beach or water skiing, usually summer conjures up the images of beautiful views, the sounds of splashing of water, and the smell of sunscreen.

What you normally don’t think of, as part of this picture, is the sounds of handcuffs, the smell of a jail cell, or the visual of red and blue lights rolling up behind you. Sorry to ruin the picture, but I gotta warn you. Its not all fun in the sun out their on the waters. 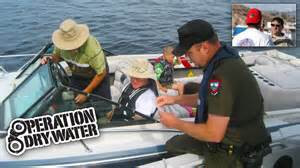 Operation Dry Water launched in 2009 by the National Association of State Boating Law Administrators with the U. S. Coast Guard, with the goal to bring awareness and education to recreational boaters about the dangers of alcohol and drug use while out on the water. According to the U.S. Coast Guard, alcohol is the primary contributing factor in recreational boating fatalities.

While not mandated, law enforcement agencies have chosen to participate in Operation Dry Water, lending credibility to the concern that Boating Under the Influence (BUI) is a real problem. Here in Los Angeles, the Sheriffs Department at Castaic/Pyramid Lakes and Marina del Rey; the Los Angeles Port Police; and U.S. Coast Guard are participating in the program. June 26 to 28, 2015 has been designated as the Operation Dry Water heightened enforcement weekend. But know law enforcement says outreach and awareness of BUI is year-round and added enforcement will include holiday weekends. So think of all the attention that normally accompanies DUI checkpoints on the road, that same idea has rolled out on water.

Boating Under the Influence Laws

Just so we are

all clear: it is illegal to Boat Under the Influence. The California Harbors and Navigation Code is the law on the water. It is not as stringent as the law on the land and often people get confused. The one break you get on water that you don’t get on land is that open containers are fair game. But make no mistake about it, operating a boat under the influence is just as illegal as driving a vehicle under the influence of drugs or alcohol.

The law recognizes that boating under the influence can be just as and even many times more dangerous than driving under the influence of drugs or alcohol. People drive every day and are well practiced at it. When it comes to boating however, many people might drive a boat a couple times a year. Such a person is far from an expert boat driver. For that same person to be drunk and boating is extremely dangerous.

Another important distinction between driving and boating is that driving takes place most commonly on roads that are fairly wide and stable. Boating often takes place out in the ocean where the tides and winds can change in an instant. If a person is under the influence, they will not be fast enough to respond properly to the changing circumstances. In fact, statistics from the United States Coast Guard show that in boating deaths involving alcohol use, over half the victims capsized their own boats and/or fell overboard.

Furthermore, boats, by their very nature, are inferior to cars in their ability to steer and to brake. Given that the typical boat operator spends only a few days a year on the water, they are typically not expert at handling the different problems that boaters encounter from time to time. When the hot sun and alcohol have had their say, an impaired person at the helm of a boat may be in bad shape and will be putting everyone aboard and nearby in danger.

while under the influence of alcohol and/or drugs.

Being under the influence is defined as having a blood alcohol content (BAC) of .08 percent for a recreational vessel and .04 percent for a commercial craft. The statute sets a zero-tolerance policy for watercraft such as aquaplanes and water skis and for boaters under the age of 21. The zero-tolerance policy means that any trace of alcohol is illegal when operating these types of watercraft. 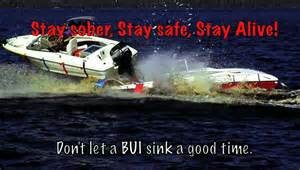 DUI and BUI cases are similar in prosecution. Additionally, while the penalties vary, it is only a slight variation. Under the BUI laws, you can still face fines, possible jail time and alcohol education classes. The one distinction is in the length of time priors can be used to enhance your sentence. Instead of the priorability time being ten years, as in DUI cases, priors only enhance a BUI when the DUI or BUI was committed within the last seven years prior to the offense.

Also, unlike a DUI conviction, the California DMV will not revoke or suspend your driver’s license following a BUI conviction.

It is ‘per se’ under the influence if you are operating a watercraft in California and your blood-alcohol content is above a .08%. Keep in mind, you can still receive a BUI dependent on the officer in charge. An officer’s determination that you are “under the influence” is very important. This is true even if your actual blood alcohol content is lower than that percentage.

Let’s assume the scenario above when an officer comes on board for that safety check, the next thing you know he smells alcohol on your breath, decides to do field sobriety tests, and boom next thing you know he determines that you impaired and unable to operate the boat. You may be at risk for arrest based on Caliornia’s boating under the influence laws.

These cases can be defensible. Unlike driving patterns, boating behavior (i.e. straggling lanes, speeding, are harder to quantify and qualify, thus giving the boater more margin of error on a boat than in a car. And what about those objective signs? If someone has a red face and crazy hair, driving a vehicle, it’s easy to apply assumptions. This person is drunk! However, that same argument is easily explainable for the person who has been in the sun and wind all day. Isn’t everyone unkempt on a boat? Unsteady gait? Of course! You have been walking on water all day! 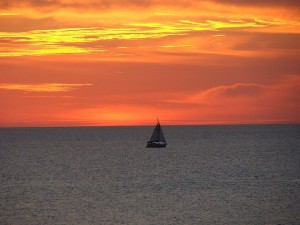 There are many confusing variables involved in this type of case. Even a seasoned law enforcement officer may mistake light drinking for violation of boating under the influence laws (BUI). Your case may have some of these conditions, or any of the many others that lead to unwarranted BUI arrests. You could find yourself in a position of too much fun in the sun or wrongfully facing BUI charges. If so, you should consult with a crime attorney. A qualified DUI attorney can use the particulars of California boating under the influence laws to help you.

Summer is a great time to get outside and enjoy all that we love about Southern California. Pack your sunscreen, wear a hat, and choose a designated boater.