The California Highway Patrol (CHP) released California auto theft numbers for 2014, and proudly noted a decline in theft rates for a second straight year. The number of vehicle thefts fell by 7 percent over 2013. However, despite the overall decline, California is still king when it comes to grand theft auto. But is California really the auto-theft capital of the world?

It may sound like hyperbole, but it is a quote from Frank Scafidi, a spokesperson for the National Insurance Crime Bureau (NICB). The NICB recently released their report on vehicle theft rates for 2014, comparing 380 metropolitan statistical areas across the country. Seven of the top 10 auto theft areas are in California, with the Bay Area topping the list.

Almost half of California’s automobile thefts occur in the southern counties of Los Angeles, Orange, Riverside, San Bernardino and San Diego. Why does California get the dubious honor of being number 1 when it comes to car theft? According to Scafidi, “there’s just more cars, and the cars are in better shape because of the nicer weather.”

Auto theft is a serious crime, and grand theft auto can be charged as a felony. Even joyriding can land you in prison for a year. Still, the stiff penalties haven’t prevented almost 160,000 cars from being stolen in California last year. The most popular car to steal? A 1996 Honda Accord. In fact, the top 17 cars stolen last year were all Honda Accords or Honda Civics. A Toyota pickup remain the top stolen truck, and has been since 1984.

Protect Yourself from Auto Theft

The NICB report recommends the “Layered Approach” to protection, including common sense, and things like tracking devices, warning alarms, and kill-switches to reduce the likelihood of vehicle theft. However, the CHP offers other advice, including not hiding a spare ignition key on the vehicle, and to take extra precautions when driving one of the popularly stolen cars.

According to CHP Commissioner Joe Farrow, “people need to remember that vehicle theft is a crime of opportunity. Simple deterrents such as locking vehicle doors, parking in a secure or highly visible location, and not leaving the car running unattended can make all the difference.”

Hope for Recovering from Auto Theft

Even if you have your car stolen, don’t give up hope, because nearly 90% of stolen vehicles are recovered. 65% of vehicles come back intact and drivable. In many California counties vehicle recovery rates have also been on the increase. However, others are stripped for parts, or shipped out of the country from our California ports.

If you are worried enough about having your car stolen, you can always move to State College, Pennsylvania. The college town boasted the lowest rate of car thefts, with only 21 vehicle thefts per 100,000 people. However, the low rate may be a result of it being home to Penn State, with many students getting around on foot or bike rather than by car.

The Kavinoky Law firm stays apprised of California law and statistics. We ensure we know all the current trends to help provide the best criminal defense in California. A great criminal defense attorney can handle criminal cases that range from petty theft to murder.

Don’t fight your defense on your own, call The Kavinoky Law Firm at 1.800.NO.CUFFS. 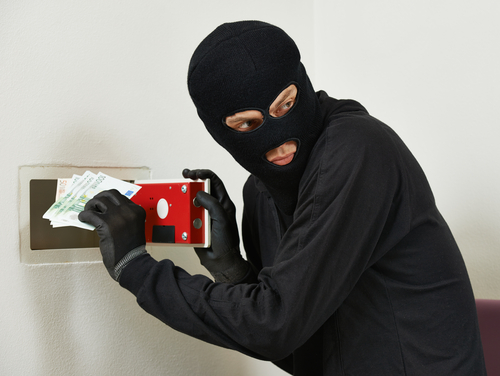 The crime of theft is a rather broad one. It’s stealing. It’s taking property from another person without their permission. There are various ways in which a person can steal, and each way is its own specific crime. Just so there is no confusion, be aware that ‘larceny’ and ‘theft,’ for purposes of the California Penal Code, are the exact same thing. The term ‘theft’ is the more modern and common term used today. Read more below to find out about the differences in California Theft Laws.

The California Penal Code’s definition of embezzlement is “the fraudulent appropriation of property by a person to whom it has been entrusted.” Embezzlement is still charged as a theft, and the same standards regarding the value of the property that apply to grand theft and petty theft apply to embezzlement. A typical example of embezzlement would be if you gave your stock broker $10,000 and instead of him putting the money into stocks, he put it in his personal checking account. The punishment for embezzlement is the same as that which applies to general theft charges.

Burglary is a crime that is always coupled with another crime. Burglary occurs when a person enters any house, room, apartment, shop, warehouse, store, tent, or floating home among other dwellings and storage facilities with the intent to commit petty or grand theft or to commit another felony. Therefore, one who enters a house without the intent to steal or commit a felony is not guilty of burglary. The issue of intent requires the technical knowledge of an expert criminal defense attorney.

Robbery is a combination of assault and theft. It is the felonious taking of personal property in the possession of another, from his or her person or immediate presence, and against his or her will, accomplished by means of force or fear.

A person may be guilty of forgery if that person signs the name of another person on a document, without that person’s authority. The person also has to sign the document with the intent to defraud or steal. Forgery can also occur when a person makes false identification cards or other fake documents. Forgery can be charged as a felony or a misdemeanor so it is very important to consult with a qualified attorney if you are charged with forgery.

Fraud is crime that requires deceit on the part of the person charged. There are all sorts of frauds, ranging from business and insurance fraud to defrauding a government agency by getting involved in worker’s compensation fraud and welfare fraud.

Identity theft is a crime that has seen some publicity of late. People have so much information floating around on the Internet that it has created an incentive for others to steal that information and use it to obtain credit, phones, or almost anything else. It takes an experienced California Identity Theft Attorney on the cutting edge of technology and California Identity Theft Law to defend a person accused of identity fraud in many cases.

If you have been charged with a theft crime, do not hesitate to seek professional counsel from a qualified criminal defense attorney. Contact us for a case evaluation. The law is complicated and trying to tackle it on one’s own or with an attorney who has little experience could be detrimental in the long run.