Skip to content
NoCuffs.com » Recreational Marijuana Use Legal in California

Recreational Marijuana Use Legal in California
Posted by Nicole Hanratty on November 9, 2016 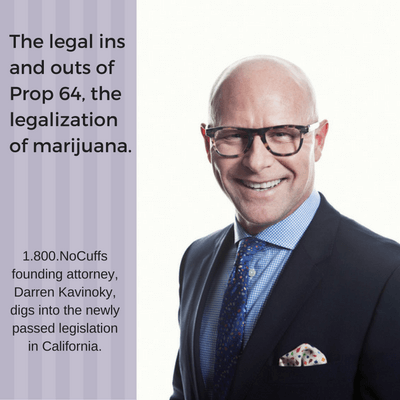 Recreational marijuana use is legal in California now and 1.800.NoCuffs brings you the legal ins and outs of Prop 64, the legalization of marijuana.

Prop 64 officially titled the “Control, Regulate and Tax Adult Use of Marijuana Act,” passed in the state of California on November 8, 2016. It ushers in, effective immediately, the passage of Proposition 64 which legalizes the recreational use of marijuana. There are key takeaways from the proposition and 1.800.NoCuffs wants you to know your newly acquired legal rights.

1.800.NoCuffs founding attorney Darren Kavinoky weighs in on the passed legislation, “Here is yet one more example of where there is a gap between the law and how the law gets implemented in society. And so now that the voters in the state of California have spoken, now the devil’s in the details. How this is going to play out and shake out through the court system is probably going to take a significant amount of time, it’s going to require the work of a lot of lawyers and judges and thankfully at the end of the day, will generate significant tax revenue to fulfill on the intentions of the bill.”

1. As with alcohol, you must be 21 to use marijuana recreationally. [1] According to attorney Darren Kavinoky, “There is an exception here because there is a concern that people that were the ages of 18 and 21 would, therefore, be deprived the opportunity to use marijuana if this passes, even those who were using it lawfully under the Prop 215 medical marijuana laws. And one thing that appears to be clear is that those who are between the ages of 18 and 21 and who do have a doctor’s recommendation will still be able to use and lawfully possess that recommended marijuana.”

2. You can now grow marijuana at home. The law states that you can grow up to six marijuana plants in your residence without violating the law. But to be in compliance, “The living plants and any marijuana produced by the plants in excess of 28.5 grams are kept within the person’s private residence, or upon the grounds of that private residence (e.g., in an outdoor garden area), are in a lockedspace, and are not visible by normal unaided vision from a public place.” [2]

3. You have the right to share your “crop” with another legal adult but it is illegal to sell it. “Persons 21 years of age or older to: (1) Possess, process, transport, purchase, obtain, or give away to persons 21 years of age or older without any compensation whatsoever, not more than 28.5 grams of marijuana not in the form of concentrated cannabis.” [3] Explains Kavinoky, “The implementation that’s been discussed is that marijuana will be commercially available for recreational use in 2018, even though the law is in effect now, because of the various hoops that need to be jumped through. So that definitely creates this strange bit where it takes people who are interested in smoking marijuana recreationally that don’t have a medical marijuana card and turns them into cultivators. Because the only way that they could lawfully smoke marijuana now is by growing their own. So that is an interesting perhaps unintended consequence of where we are with this.”

4. You may have the right to have your sentenced altered if you have been previously convicted of a marijuana offense that is now a reduced crime. The passage of Proposition 64, “authorize[s] courts to resentence persons who are currently serving a sentence for offenses for which the penalty is reduced by the act.” [5]

4. It may be illegal to be searched based on the scent of marijuana alone now with the passage of this new California law. “One of the biggest impacts potentially that is going to play out here is the impact on the area of search and seizure law under the Fourth and Fourteenth Amendments to the U.S. Constitution,” explains Kavinoky. “The way that it has played out before since marijuana was considered contraband and illegal substance, was that the mere scent of marijuana would provide a police officer or law enforcement officer with the opportunity to either get a search warrant or depending on the circumstances and the exigency or some other exception to the warrant requirement conduct an immediate search. Now the circumstances where those searches can happen are either going to be eliminated entirely or since I can still envision some circumstances where the scent of marijuana could still trigger a lawful search, if it’s not going to be eliminated then they’ll be significantly curtailed.”

What remains illegal about marijuana possession or usage?

1. Public smoking of marijuana in public is a violation of the law. This includes smoking it “while riding in the passenger seat or compartment of a motor vehicle.” [2]

2. It is illegal to consume, advertise, or sell pot near schools or any type of youth facility. Prop 64 “prohibit[s] the marketing and advertising of nonmedical marijuana to persons younger than 21 years old or near schools or other places where children are present.” In addition, it “prohibit[s] the consumption of marijuana in a public place unlicensed for such use, including near K–12 schools and other areas where children are present.” [2] It must also be sold in “child-resistant containers and be so labeled so that consumers are fully informed about potency and the effects of ingesting nonmedical marijuana.

5. Cities and communities have the power to ban the commercial sale of marijuana with a passed ordinance. “The Adult Use of Marijuana Act sets up a comprehensive system governing marijuana businesses at the state level and safeguards local control, allowing local governments to regulate marijuana-related activities, to subject marijuana businesses to zoning and permitting requirements, and to ban marijuana businesses by a vote of the people within a locality. ” [2]

7. Medical dispensaries are not legally allowed to sell to customers purchasing the plant for recreational purposes. Businesses that sell alcohol or tobacco or also not prohibited to sell nonmedical marijuana.

Sources
1. “The Adult Use of Marijuana Act prohibits the sale of nonmedical marijuana to those under 21 years old, and provides new resources to educate youth against drug abuse and train local law enforcement
to enforce the new law.” Retrieved via http://vig.cdn.sos.ca.gov/2016/general/en/pdf/text-proposed-laws.pdf#prop64

5. “SEC. 3. Purpose and Intent. The purpose of the Adult Use of Marijuana Act is to establish a comprehensive system to legalize, control and regulate the cultivation, processing, manufacture, distribution, testing, and sale of nonmedical marijuana, including marijuana products, for use by adults 21 years and older, and to tax the commercial growth and retail sale of marijuana. It is the intent of the people in enacting this act to accomplish the following: … (z) Authorize courts to resentence persons who are currently serving a sentence for offenses for which the penalty is reduced by the act, so long as the person does not pose a risk to public safety, and to redesignate or dismiss such offenses from the criminal records of persons who have completed their sentences as set forth in this act.” Retrieved via http://vig.cdn.sos.ca.gov/2016/general/en/pdf/text-proposed-laws.pdf#prop64

Criminal Defense attorney Darren Kavinoky is the founding attorney of 1.800.NoCuffs. If you need a DUI attorney in Los Angeles, you can see the team at The Kavinoky Law Firm here.